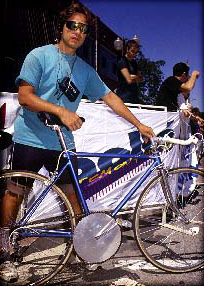 Every day the Tour De France generates a new story line, a new hero, a new winner, a new looser and someone who came just short of writing themselves into the history books with an epic ride. After 19 stages, 2,032 miles and two straight brutal mountain stages the 2013 Tour De France set off on it’s second to last day with four riders in striking distance of the 2nd and 3rd podium spots. The stage would finish atop of one final HC climb  (Hors Category – beyond Category) and anyone of the top five were candidates for the win.  Chris Froome ruled the first spot with a commanding five and a half minute lead but only 47 seconds separated the 2nd-5th spots. Alberto Contador in 2nd, Nairo Quintana in 3rd, Roman Kreuziger in 4th (Contador’s teammate) and Joaquim Rodriguez in 5th.  Would Froome Crack?  Would an unkown rise from the heap of exhausted bodies? Who would take the final day before Paris solidifying a podium spot and the final mountain top finish in a punishing tour?

In the end the insanely energetic and relentless 41yr old Jens Voigt broke free of a lead group and led going onto the final 10.9k HC climb. Was this to be his epic day? Jen’s lead was not enough, he was caught and after several attacks a final thrust by Froome formed a lead group of three; Froome, Quintana and Rodriguez.  Froome needed to solidify overall victory and obviously wasn’t in danger of bonking or having a bad day, Rodriguez needed time to take a podium spot and Quintana needed victory to take the Polka dot best climber jersey, the white best young rider jersey and to grab his first ever stage win after several close calls. Rodriguez powered the group grinding away  for time and it worked, Contador fell back and off the podium.

Froome attacked for one last bid at domination but Quintana was able to follow and then counter. The small powerful rider hailing from Columbia, a land long known for and proud of it’s climbers, was about to put his stamp on the race in a big way. Froome could not follow and after 2,032 miles, 19 days of riding, two killer days in the mountains and a mountain TT prior to this stage Nairo Quintana rode away to glorious victory. As he crossed the line celebrating his first Tour victory Quintana also took the best climbers jersey off the back of opportunist Pierre Rolland, nailed down the best young rider jersey,  jumped to second place overall and he did it all on Colombian Independence day! What a great day for all these riders and for all of cycling. Long live the Tour!

Who is Nairo Quintana? Interesting Bio here at Cyclinginquisition.com