Who put the Child Proof cap on Windows 7?

I Fired up the Windows 8 Consumer Preview via  VirtualBox on a Mac Laptop. What can I say – this is first time I’ve not been impressed, excited, had fun, or stayed up late playing with a new Desktop or Server OS, ever.  Looks like it would be great on a phone, tablet or touch driven device. I don’t get why this is a public preview for desktop or laptop computers.

Is Windows 8 Vista 2.0? A bridge OS between now and 3-4 years in the future much like Vista was the rushed deployment to compete against OSX, and Windows 7 was the final stable fully fleshed release. At least that’s my hope at this point. Why was it deployed as a home consumer desktop OS when it’s clearly designed for a touchscreen device? That’s an excellent question since my initial reaction after 4 days of playing is – Not on my desktop you won’t! My only guess is this release is intended to let everyone know Microsoft is committed. Hardware vendors and competitors take note. Otherwise… someone went and got drunk and accidentally pressed the pre-release button!

Windows 8 is clearly designed for touch screen with no benefits I’ve found for a MAK (mouse and keyboard) driven device such as a desktop or laptop computer.  I’ll keep playing and hopefully Microsoft has another version or listens to constructive quality feedback to make some changes.

The process for installing and setup couldn’t have been easier. 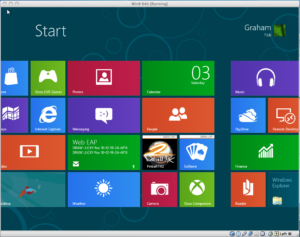