Updated 5/5/12 – Looks like Microsoft read my post ;-) and they’ve released a quite nice looking simple and clean SkyDrive version! http://www.gfisk.com/skydrive-finally/

About five years behind everyone else I finally checked out online storage options. So I installed Dropbox – bam boom pow I have two computers syncing 2gb for free in about 5 minutes. I installed Mozy home and in about five minutes I’m rolling with 5gb storage. Okay time to checkout Microsoft, I kinda forgot they have joined the fray. Windows Live SkyDrive – 25gb free. Hell yeah!

Did I know what I was in for? Wow.

I setup a Windows Live account and install Windows Live Essentials 2011. Um… not sure what to do next. Looking for How To, can’t find it. It looks like Microsoft wants me to upload one file at a time via a web browser? Seriously?

SkyDrive, Sync, Mesh… Seriously? I’m getting tired already. All of this is free so I guess I can’t complain. So now I’m off to get Windows Live Mesh 2011.

Hmm Windows Live Mesh install turns out to be the Windows Live Essentials 2011 install and when executed I’m informed I already have Mesh installed. Confused and now having gone in a loop created by Microsoft apparently not knowing what products they make or how they work I check my All Programs Menu – I see Live Movie Maker and Photo Gallery etc but no Windows Live Mesh. Found it! All by itself in the Windows Live folder. Makes sense except for the part where none of the other Windows Live apps are in the folder. Not a major issue but in the general scope of obtaining cloud storage from Microsoft I’m starting to feel their strategy in this space may have been conceived in a bar, after midnight.

At this point I’m loosing interest in Backup and Sync. Microsoft is going to make me reverse engineer their “strategy” but hey 25gb free backup is pretty awesome and Mesh is a cool name. 45 minutes invested….

I launch Windows Live Mesh. Not SkyDrive, not Sync, remember Sync is now Mesh and you sync with Mesh. I think. I setup Mesh to sync the My Documents folder. I’m presented with “where do you want to Sync My Documents” and there is SkyDrive as my option to sync with (sync with Windows Live SkyDrive not Windows Live Sync, not Windows Live Mesh) and next to the SkyDrive option is a heart dropping note – “5 gigabytes”. No way dude I didn’t come this far for 5gb, I was promised 25gb. I cave in easily at this point and choose the only available option. 5gb is okay I guess. That’s when I get a notification that Mesh/Sync/Skydrive cannot backup my PST files. Wait, what? Microsoft cannot backup it’s own files!? I cave Microsoft, you win.

Hopefully Microsoft will get their sh*t in… sync. Until then I don’t appear to be alone in my confusion and frustration:
http://arstechnica.com/microsoft/reviews/2010/06/windows-live-sync-is-frustratingly-bad-it-could-be-awesome.ars 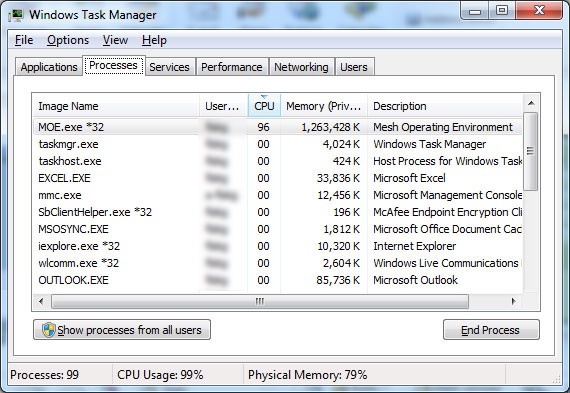