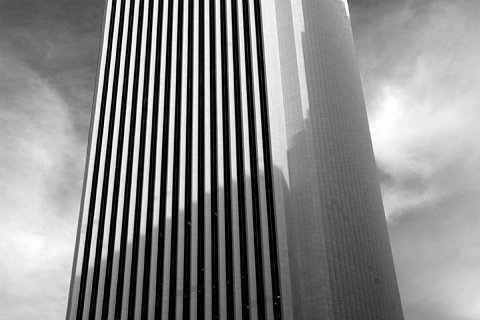 Yes I know it’s 1:45am ma’am, yes I do indeed need a 3:45am wake up call… When I called I doubt they knew it was from the bathroom phone while on knees with a dark cloth preparing to unload and reload 25 4×5 sheet film holders using the bottom of an overturned dresser drawer on the tile floor as my table. A day’s worth $$ of exposed film and peoples careers in my hands (I only fucked up once – sorry Bob!). I always wondered what neighbors thought hearing me knock the dust out of 25 film holders with the dark slide and then a blast of canned air at two in the morning – whack whack! spppssshhhh, whack whack! spppssshhhh…  transferring 50 pieces of 4×5″ sheet film to light tight boxes (no dust, No Dust!), labeling the boxes with exposure information and then reloading 50 new sheets for the next shoot in two hours.

I had the misfortune of coming to Chicago as a young photographer right as the streets were flooded with photographers from all the closed catalog ‘factories’, work was tight. But after time as a sheet film processor with Gamma photo labs I luckily landed an excellent job with Hedrich Blessing. Full time, benefits and a steady paycheck, outrageously awesome for a photographer’s assistant!

School?
The first inkling I had that Art school had not prepared me for this job was the following question posed by HB photographer Marco Lorenzetti “how do you light black?”. Uhh lots a light right? Well you don’t light it, not directly anyhow, you reflect light off of it. I learned more in two weeks with HB than I ever did during the five years of studies for my BFA. Hedrich Blessing was revered for it’s abilities, they knew their stuff. Wanna make good daylight pictures? Use tungsten film, won’t tell you the filtration but if you figure it out you never shoot daylight film again (biggest diff is in the shadows, you get B&W film like saturation and no color cast)

As an apprentice…
You sweat a sweat that only happens at 2am in a skyscraper with air services disabled for the night. I made $6 an hour, about $12,000 a year, but they paid overtime and I made $19,000 my best year. You earned it though, you really really earned it. Seven to ten 70lb travel cases (airlines max weight, though skycaps would let you slide a little for an extra twenty), working hours that would be considered sick by normal humans. Jump a plane, drive to a location, unpack all your gear, set lights, tape reflectors, move furniture, run power, bring a 100lb pot down from two floors above, move the desk, filter all the existing lights, DO NOT scrape the Pearwood walls, find more power in the women’s restroom, DO NOT melt the finish on the IBM executives $75,000 inlaid desk, convince the nightman to call the lightman at home so he can telnet in and turn some lights on for us, DO NOT burn the place down with your forty odd lights placed anywhere in the room that the lens can’t see (praying that the bulb taped under the mahogany desk doesn’t burn it, or fall to the floor during a two minute exposure), then expose film for 30minutes after your four hours work. Then break it all down, fix the room, put all the gear on your ‘little red cart’ and do it again. Up and down an elevator about ten times while setting lights for the next shot. Do it again and again until it’s six am, then go to your hotel and fall down, wake up and do it over. Fly home and sleep all day Saturday.

Wildest shoot?
hmm well there’s riding in Miglin Beitler’s (firm of Lee Miglin who was later murdered by Andrew Cunanan) white leather upholstered metallic blue French helicopter for two hours circling the Chicago Skyline with Bob Harr the pilot asking us exactly what the point was in going endlessly around in circles. The point was waiting for the sweet shot of what was to be the new worlds tallest building called the Skyneedle. The pilot perked up when making a pass over the sunset orange waters of Chicago harbor and he excitedly yelped into our headsets “look at sears tower!”. Sunset was coming straight through the top floor windows. Completely awesome. But of course that meant I had to start loading cameras and licking 2.25 film rolls in a rapid frenzy as Bob shot away. Bob and I would shoot the Architects model in the studio and digitally merge that with the aerials for an amazingly realistic rendering showcasing exactly what the building would look like an expensive cutting edge process in 1992 – Scitex imaging) . I logged lots of chopper time with Bob…

But how about with Jim Hedrich. I’m blocking two lanes of traffic in downtown at the New York Midtown Hilton, 11pm on Avenue of the Americas. Models with a horse and carriage in the street. Cabbies are cool and helped block and chat (smoke break!). Jim would like me to hang lights with rope off the planters on the 8th floor deck, get some light on the buildings skin. I believe I managed without rope, hanging out over Avenue of Americas. Then it’s time to put the HMI’s to work that we rented from an awesome theater production shop – Jim says “light the building on the next block, we need some separation between buildings over there”. I point a light at a buildings skin a block away, hell I could light up planes in the sky with those HMI’s. The models show up at midnight.We place em light em and shoot em. We’re a two man team  blocking traffic on Avenue of Americas and lighting up buildings. I told Jim If it was a Hollywood movie my job would’ve been done by ten people and the union would have nixed about half of what I did as to dangerous. Jim smiles. How he’s been doing this for 35 years is beyond me. I’m ready to pass out sweating like crazy and delirious from lack of sleep. Oh well back for a two hour nap in my $250 dollar a night bed, I’ve got to get up at 5am to prep for the swimming pool shoot!

The same week while in the sister Hotel across the street at 2:30am and I was on a 20ft ladder working the domed ceiling area while setting up the restaurant shot when all of the sudden FDNY firetrucks are pulling up with sirens blaring and fireman bursting through the door. It seems I personally triggered a fire alarm when I blocked a laser beam smoke alarm while on the ladder.  A fire in the restaurant of a Manhattan hotel during sleeping hours… These very big tough New York fireman did not look pleased to be drug out at 2:30am on a weeknight. Oh man were they pissed. Twas the night I cost New York City whatever it costs to send FDNY crews out at 2 in the morning in the Big Apple.

Hotels
You have no idea what goes on in a Hotel until you work and live in them. A common comment from Hotel staff was an amazement of how adults behaved while in a hotel. Not just kids or yahoo’s but professionals, old folks, married people. Something happens in a hotel, and staff always has to clean up or call the cops. And this is at the high end Hotels…

1am Chicago Hilton lobby chatting with doorman when…
…Hey, hey, visitors can’t go upstairs.
Can I make a phone call?
…Yes
Thanks love
…Where are you going?
I need to go to the bathroom, can I at least use the bathroom?
…Yes but make it quick.
Radio crackles
…Hey guy’s I’ll be right back, just got a call that someone’s having sex in the bathroom

Hotels are strange: A man ripping the front desk with his blushing young son on one side and his “guest” on the other. “I can have whoever I want come to my room, I paid for it it’s mine”. The redder in the face the son gets the more my boss and I chuckle… appears this poor kids first timer is not only going to happen in the presence of his father, but with the knowledge of the entire staff. The staff wins, the “guest” leaves and the kid slinks away. The “guest” returns a half hour later, no longer in a miniskirt, but in a very 9-5 professional outfit. The staff acknowledges her effort and professionalism and directs her to the appropriate room (decorum apparently must be followed). She leaves an hour later back in her mini, a shoulder bag in tow off to work.

Best story from staff: A call was received that a TV had been blaring white noise at full blast for over an hour. Hotel staff enters the room to find a naked man unconscious on the floor outlined by chocolate bars and burnt candles, the TV blaring away. “he was still alive… no problem we see stuff like this all the time”