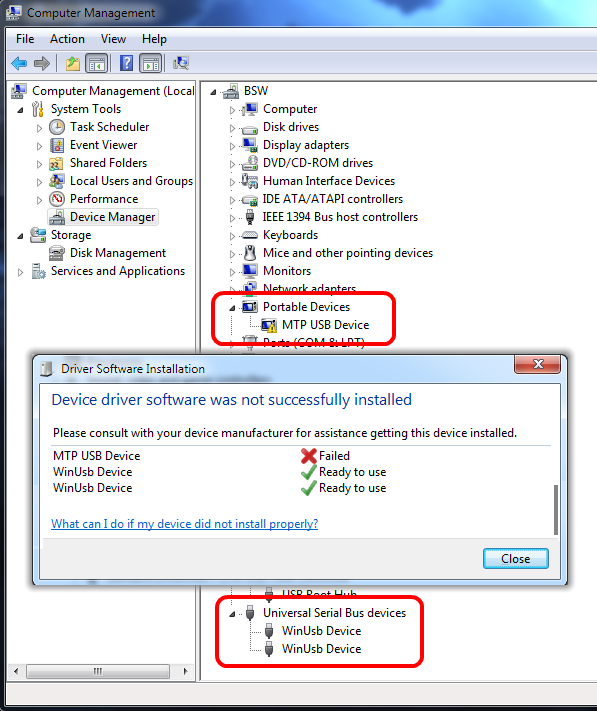 Twice within the first month of using the wonderful Nokia Lumia 1020 running Windows Phone 8 with the Black firmware update my computer has been unable to recognize the device using the standard Nokia USB cable connecting to Windows 7 on a desktop computer. Unfortunately I’ve been here before with multiple iPhones, Blackberries and even a Handspring Visor with various Windows OS’es and devices over the years. Windows has come a long way from the days of Windows 95/98 “plug and pray” but still occasionally struggles to recognize or support devices.

Issue:  I detached my phone from the cable in the morning and 10hrs later when reconnected nothing happened, for the second time in two weeks.  I check Device Manager and see a generic MTP USB Device icon in the Portable Devices group with a yellow exclamation mark. When I check the properties of the device it lists the issue as – USB Error This device cannot start (Code 10). Code 10 is a generic error indicating an issue with a device. Sigh….I’ve been here before and know it can be quick and easy, or I’m about to loose an hour or two.

Solution: Restarting the phone.
Yes indeed that’s what’s solved my issue twice now. Of course that’s not what I tried first, because, well why would the device generate what appears to be a OS Device driver issue? I went through the normal steps which you may need to as well if a restart doesn’t work.

If a phone restart doesn’t work, these are the standard steps for any USB device and are often the solution for phones, cameras and similar devices.

2 thoughts on “Windows Phone – Not Recognized by Windows 7”